There is nothing quite like the experience of visiting with friends that you haven’t seen in a very long time. Friends who thirty years ago lived a few blocks away on Eureka Street in Redlands, came through Northern California from Pennsylvania. In the intervening time we had a few visits, but not since both of our kids were in elementary school and we swung up to Pennsylvania after a trip to Washington, D.C. Jan and Dick Crooker had lived in Redlands and Jan had been one of my first ceramics professors at Cal State, San Bernardino, before they moved to Kutztown, PA, where Dick has been a geography professor since. Jan also continued to teach at the college level and create art. Amazingly, she no longer works in clay, and now along with teaching drawing classes and art education classes at a couple of colleges, she does plein air painting. Jan’s website is here.

The years fall away and the conversation just takes off (husbands barely able to get a word in edgewise), and of course when people like art, color is interspersed in the conversation. Jan drops cogent one line statements wherever possible, so when I relate some of the great things she said, you must imagine a small grin on her face and hoots of laughter from her audience (me). This was my favorite: She had on glasses frames that I really liked, with orange circling the lens and turquoise on the ear pieces. I complemented her on how great the frames were and her response was, “You know, I always say, I can get older, but I can’t get duller.” Here comes my hoot of agreement. Color makes the aging process slow down! 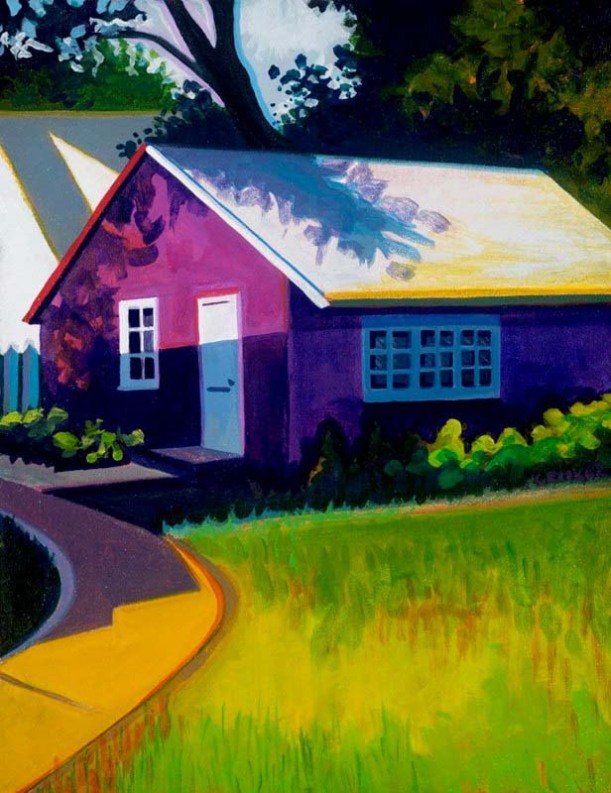 Jan’s plein air painting is done with acrylic. She loves going on location and painting outside. Rehoboth is a beach community in Rhode Island with an exciting art organization that has festivals that she participates in.

I absolutely love this group:

A Month of Sunny Days 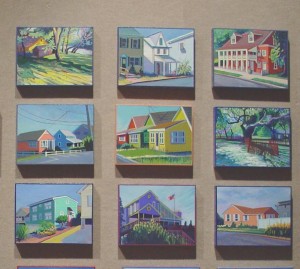 She spent the month of August one year, painting one canvas each day, in the spirit of postcards. I love the effect of them grouped together and I have tremendous respect for them as a symbol of the discipline it took to accomplish all of them in one month.

We found we both had copies of The Yellow House that tells the story of the time that Van Gogh spent living in Arles trying to convince Gauguin to stay and form an art colony with him. Can you imagine those two personalities together?

Jan mentioned that she starts all of her canvases with a layer of orange paint as a second primer because it makes the colors put on top pop. After she started doing this, she took one of her college classes on a field trip to one of the big museums in New York City where they saw a selection of Van Gogh paintings. She found if you got up really close to his paintings, you could tell that Van Gogh also used a layer of orange underneath. As Jan says, “If it was good enough for Van Gogh, it should be good enough for the rest of us.”

She walked into my house carrying a Baggallini purse. My Favorite!. Years ago, I found I had to stop carrying large satchels due to shoulder pain, so I switched to Baggallini urban backpacks and my very first was orange (when that wore out I had a black one, but quickly had to supplement with a purple.) They are so well designed it is crazy. Jan’s statement: “Orange is the new black,” I would like to amend to include “Orange and chartreuse are the new black, and purple has been black for a long time, too.” Turquoise will undoubtedly be joining them soon.

Sunday morning I had sent Terry to the store with a list that included olive bread because I love Grace Baking olive bread and thought we could use it while Jan and Dick were here. Jan walked in my front door with a loaf of olive bread as a hostess gift. I did not have a chance to make this recipe, but I must include it here. I wonder if they have artichoke dip in Pennsylvania?

Toast a slice of olive bread and spread it with artichoke dip. Place a few leaves of arugula on top. Gently fry, over-easy, an egg in a touch of olive oil. Sprinkle with sea salt and freshly ground pepper and place on top of the arugula. Splash a little balsamic vinegar on top of the egg. Great breakfast with a glass of orange juice!

I will share one last art tip. A wonderful tool I used back in my days as an art teacher were the colored pencils by Prismacolor called Art Stix. They are woodless colored pencils in a square shape. So, for kids that have a physical disability, they are great in that they are less likely to roll off a table, they don’t have to be sharpened as often, and the Stix have the ability to cover large areas rapidly because the flat side can be used for fill in instead of using just a point. So Jan talked about using the same tool in her college level life drawing classes. Her twist is that she has her students sharpen one end to a point so that there are three ways to use the one drawing tool. Traditional point, edge of the square, and flat. So, I started sharpening my box of Art Stix, starting with orange, chartreuse and parma violet. Too, cool!

There was a lot of laughing going on during our visit, and as Jan says, “If we wait another twenty years, we will be too old to have any fun.” Here’s to visits with friends, may they be more frequent!

The title of this blog entry is an example of sixth grade humor, I hope you laughed out loud, and now I am off to prime some canvases (with orange.)

All content on this site copyrighted by Lois Reynolds Mead. c. 2009-2014 all rights reserved