One of my iPhone collages was accepted into an art show “Expanding Vision a Contribution to Mobile Photography” at The Arts Center, Corvallis, Oregon. The show runs from August 21 until Sept 28. I posted this collage before, but now it has been collaged to a collage. (I was just waiting to use that sentence!)  Wish I could visit the show, but if you are in the neighborhood I hope you will drop by! Here is information about the show and a slide show of the works included.

Also, links to most of the photographers are listed.

Here is my collaged work… 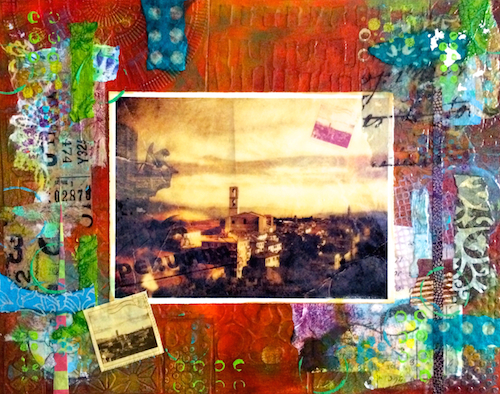 My iPhone collage was created from three photos taken while I was in Perugia last October…one of a skyline, one of a gargoyle on the museum, and one of a store with the word Perugia on its sign. Those were combined with Image Blender app and put through some distressing with Pic Grunger app. The original skyline photo was put through Etchings app for a treatment that makes it look like a postage stamp. The printed collage was put on an 11″x 14″cradled board that had been treated with lots of texture. Paper (some I printed myself, some collected),  acrylic mediums and acrylic paint were used to finish the collage.

What an honor! Excitement!

It is almost time for another trip and I find that I never really wound up the previous one. Last October we went to Umbria and Venice. I was telling the tale here and then the holidays happened, life got busy, there were family complications and I never got back to the thread of the story of our trip. Last week I went back to look at the pictures and decided to pick out a few of my favorites that I had not ever processed in order to apply a few apps to them. I came across a group that symbolized our week in Venice. They are my favorites of the experience of Venice because I took them from our second floor apartment window where we looked across at the Frari Church and down onto the small canal below the window. Every day around 4:00 two gondolas would appear and the gondoliers would discuss their price with customers. On the last afternoon we were there we succumbed and took our own ride. I loved Venice… 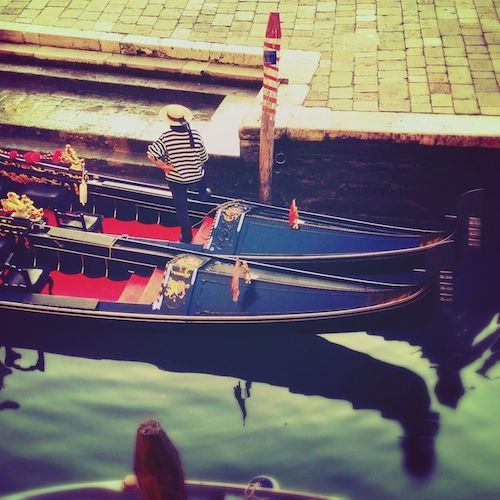 Photos taken with the native camera of my iPhone and then processed with these apps: Snapseed, Waterlogue, Image Blender, Vintage Photo, and Stackables…

The letter C is brought to you by…

Ahh, the pipevine (Aristolochia californica) is blooming and I have not commemorated it yet. A California native plant, deer won’t eat it and it grows rampantly. That makes it good on a fence where deer could get at it on one side. It also is supposed to have a blue butterfly, but you could not prove that by our plant because we have never seen one here. We do get the uniquely shaped flowers and pods (left from last season). As luck would have it, the bloom coincided with my seeing the Georgia O’Keeffe show at the deYoung Museum. I came home from the show and knew I had to photographically deal with the blooms keeping abstraction in mind and muttering crop, crop, crop…what would Georgia do? These are not scientific renderings…just some play with some new apps with serendipitous results.
The work flow in general:
All were originally taken in the iPhone native camera, then, imported into and saved from the following apps. The saved version was then imported into the next app.
Snapseed (cropping and touch up of saturation, brightness and contrast)
TouchreTouch (I had placed a sheet of paper behind each flower for a plain background and sometimes when I cropped square I had corners I needed to touch up)
Waterlogue or Glaze (for a painted look) I often did this multiple times for various degrees of the paint-look
Blender (I used the saved image from TouchreTouch as the bottom layer with each painterly image on top flattening in between)
When I liked it the saved image went into DistressedFX for some aging. Some also went into PicGrunger for creases or cracks.
Please do not think reality…just form and shape! 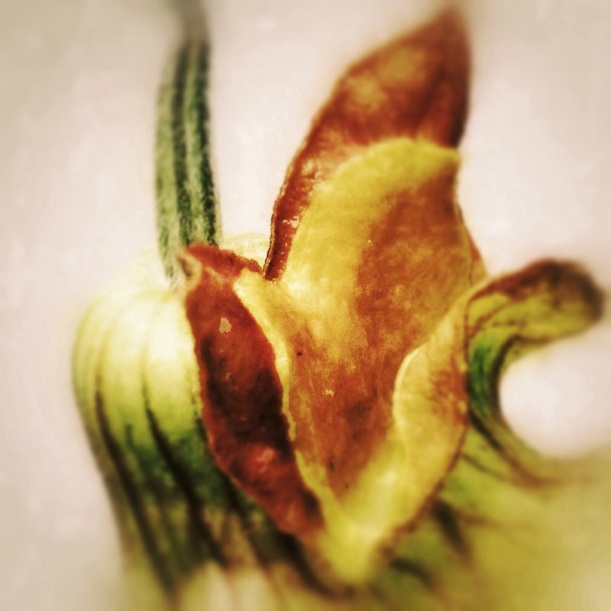 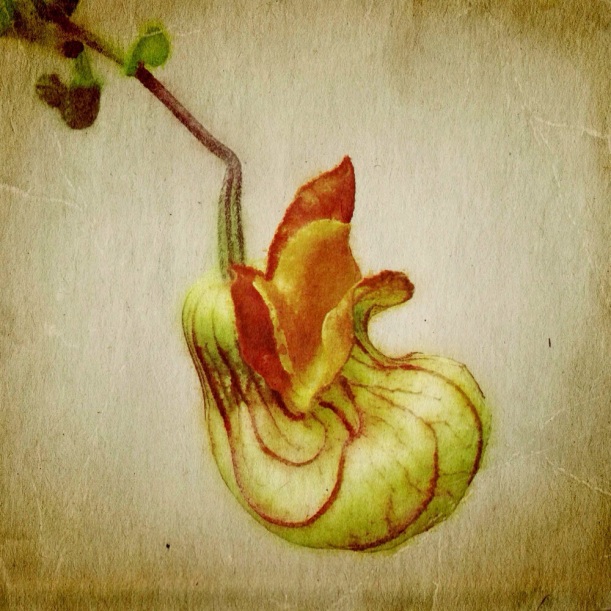 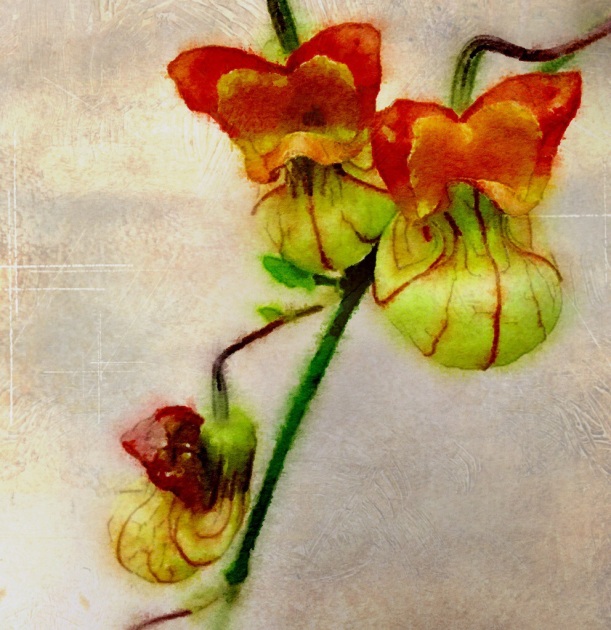 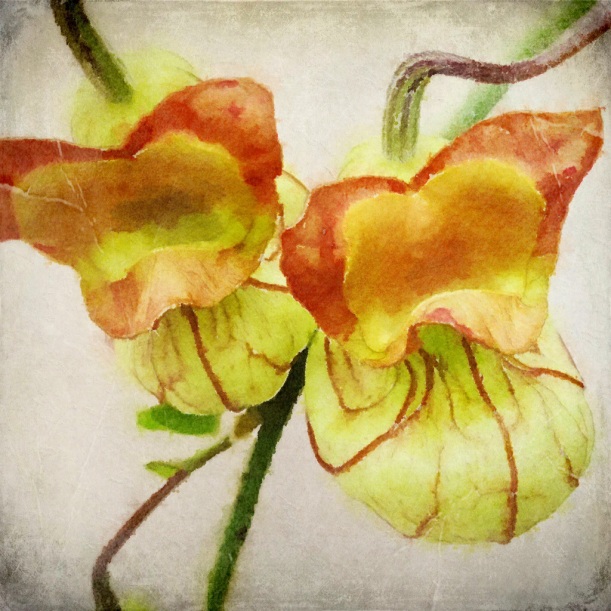 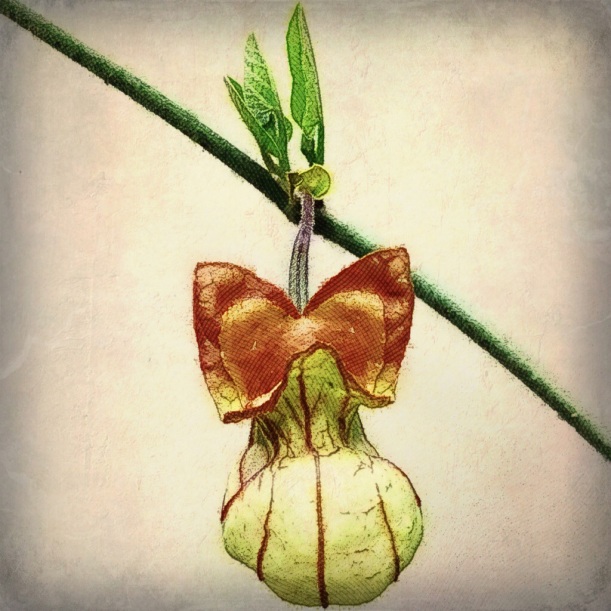 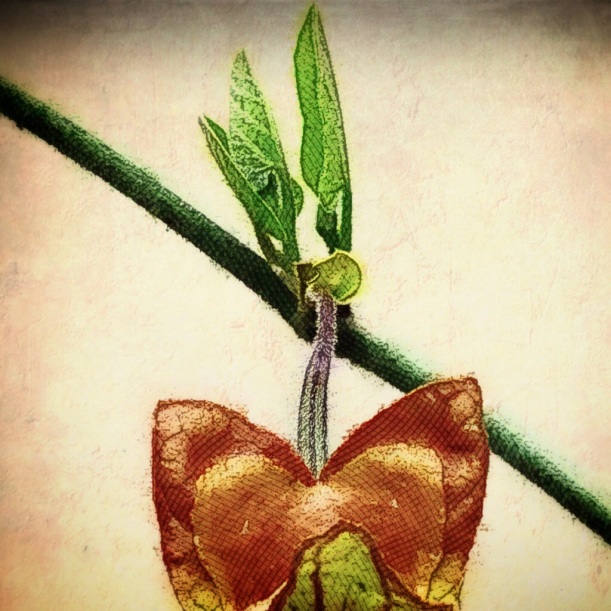 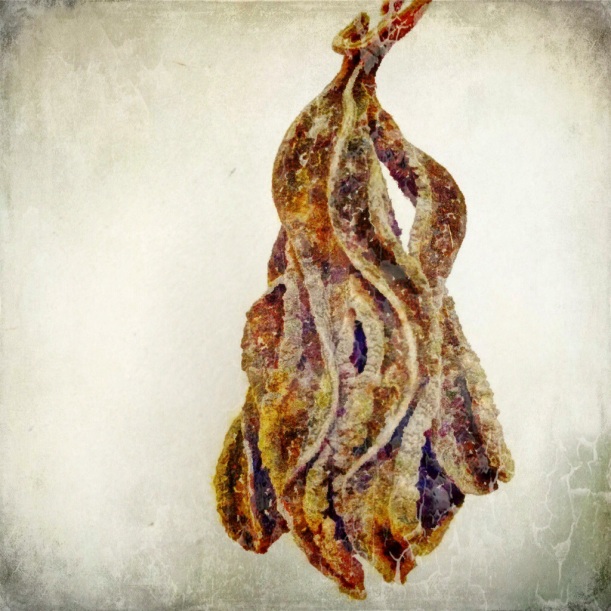 This flower is one of my garden’s highlights. 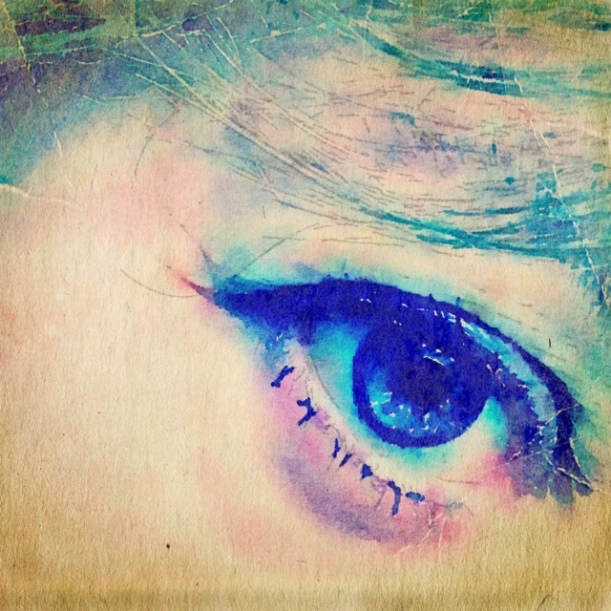 Let me say that being on the very far side of the threshold of senior citizenry, the concept of a “selfie” is way outside of my comfort zone. I do not want to know how I have aged. I don’t really like to be in pictures, let alone up close ones that I take myself…

In a weak moment I signed up for an online class with Susan Tuttle called The Art of iPhoneography Self-portraits. I have taken classes from her before and loved learning Photoshop Elements from her in this way. She is such a good teacher I thought that whatever happened I would still learn things and I really should get over my reticence…right? I am what I am…we all decay…hmmmm.

Well I have been experimenting with lots of new apps. I particularly like DistressedFX, FocalLab, and Mextures. I have been layering with Blender App. I thought I should commemorate my eye, above. It is the one that had cataract surgery six weeks ago and my vision is vastly improved and bright and clear. That, too, had its own consequence. I was not prepared for looking in the mirror and actually seeing how the reality of the aging process has affected me. Now I can see those wrinkles. And the grey in the hair. I guess my middle name is actually deNile because it was a shock. I am thinking of marketing a blurry film to go over mirrors…just enough to help the willing consumer be convinced that some of those wrinkles are not there. If it doesn’t take off as a product, then I will just keep passing my selfies through lots of blurry apps to reverse the aging process.

Forgot to mention another app that has multiple uses: TouchreTouch…takes out lots of unwanted history on a face if you end up zooming out wider than an eye!

Oh, ok, here is another one. Really that is it. Entangled in my own vanity I guess… 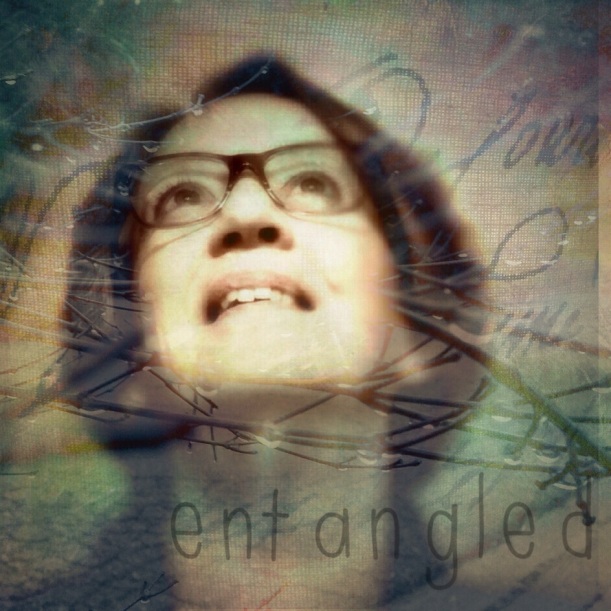 Making patterns with paint and ink and pen but the thought “What would happen if I…” started creeping in and before you know it I was grabbing my iPad to snap pictures and pulling out that old Blender App to see how I could combine my patterns. Blender App has similar layering blend modes to Photoshop Elements (overlay, hard light, hue, etc.) and there you have it. New patterns that I printed out on Office Depot Presentation paper to use in collages and bookmaking. Oh, the beauty of a morning such as this. 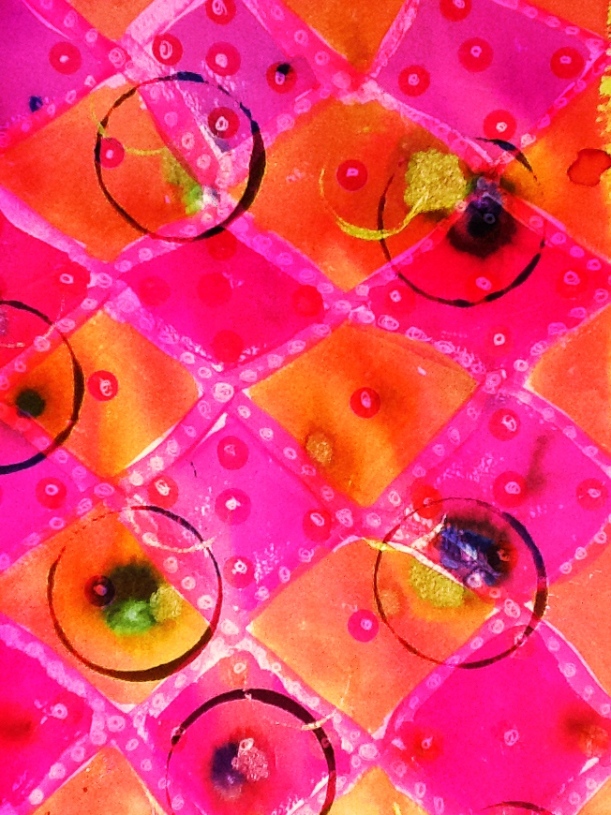 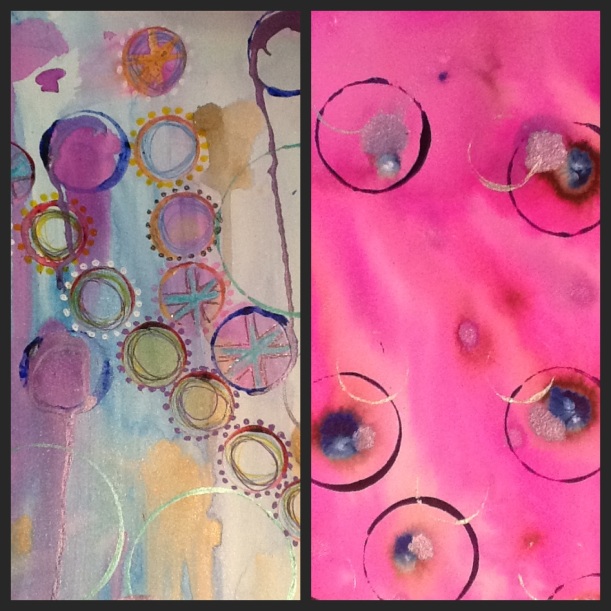 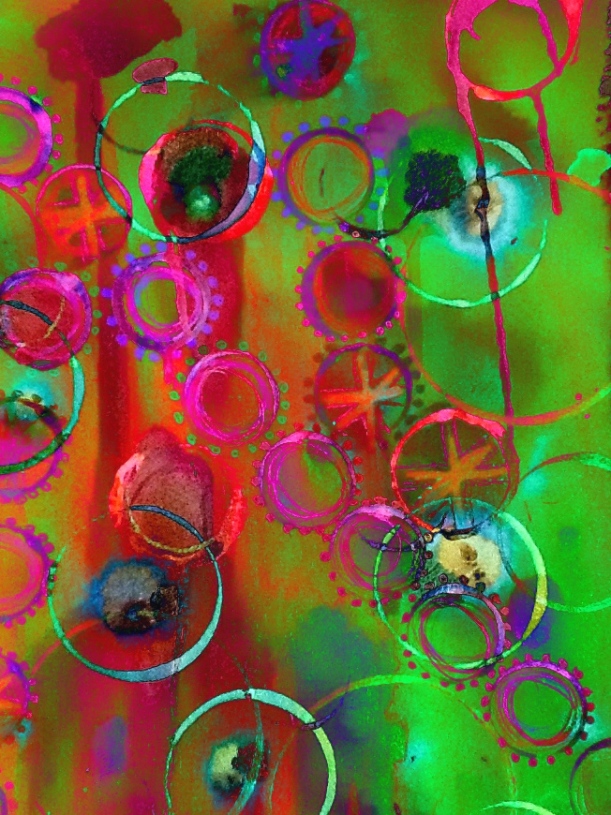 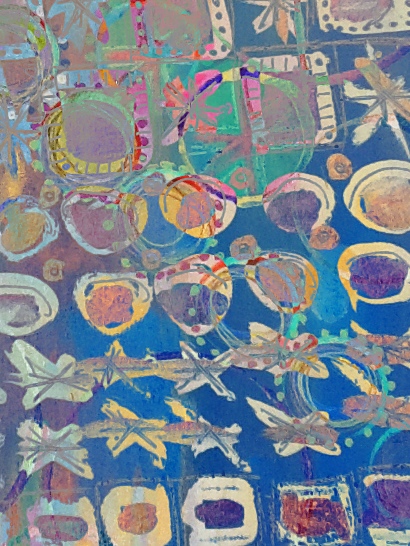 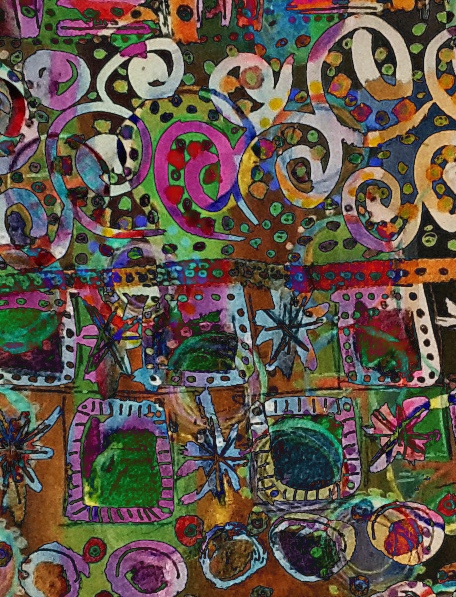 I have not made a iPhone collage in a long, long time so when I ran across this post I decided to practice again the art of layering. I did not follow the article exactly but was glad it refreshed my familiarity with the apps.

I used two images, one a statue from the Louvre in Paris and the other from an aerial photograph of San Francisco that is displayed in the tower of the deYoung Museum in San Francisco. Both images were taken with the native camera of my iPhone 4s.

1. The picture of the map had a large reflection circle in the middle of it so I put that image into TouchRetouch app and removed the light area and then saved it to the camera roll.

2. I used PhotoForge2 to crop and save the map image.

3. Both images were put in Juxtaposer app. The map was the bottom image and the statue was the top. Using the controls in this app I removed the parts of the picture around the statue and situated it in the size and position I wanted on the bottom image. This was saved to the camera roll as one image.

4. The new image was uploaded into Camera+ app and the clarity preset was applied. Then it was saved.

5. Put into Snapseed app where the Drama filter was used with an intensity +75 and saturation +75. Saved to the Camera roll.

6.Uploaded to PictureShow app and the Retro filter was applied and then saved.

7.In Photo FX the Lens FX Vignette was applied. (Black circle was selected with a softness of 200 and amount of 75.) Then  Film Lab/ grain/ Big monochrome at 36 was used and the image was saved.

8. The saved image went into Halftone app with these applied: dotsize, strength, grain at normal; paper at plain white; no layout active. Image was saved.

Then the Image Blender app was used and the image from #8 (halftone) was uploaded on the left side as the background. The image from #7 was used on the right. Slide the bar all the way to the right and edit the image with the mask control using a small brush to erase areas (I erased on the face.)

I felt the image needed another layer so with CollagePro app I combined an image of graph paper and some script from within the app. Then I used the Image Blender app to combine the two images. Once more into Snapseed for a frame and just a touch of the vintage filter to tone down the bright white of the frame. Last touch was into Impression app to sign my work. That’s it!

Inspired by my visit to a new city, new photos from the visit, and even a new app for my iPhone, today I have been playing…in between painting new doors and windows…almost done now, only the bathroom left for the worker guys to do.

The app is called CollagePro. It has a lot of nice things about it, however, it kept crashing before I could save what I was doing and I got very frustrated with it. Then I realized, if  I saved after every move I made instead of only at the end, maybe it would not get so temperamental about the whole thing and treat me nicer. So, I started doing frequent saving and combining parts I got out of CollagePro with other apps and I became more successful…a combination of CollagePro, PicGrunger, Blender, and Snapseed gave me these…

The center image is a texture shot of a large, bronze elephant statue in a Portland park.

Have I mentioned how much I like bridges? Here, the best is last… 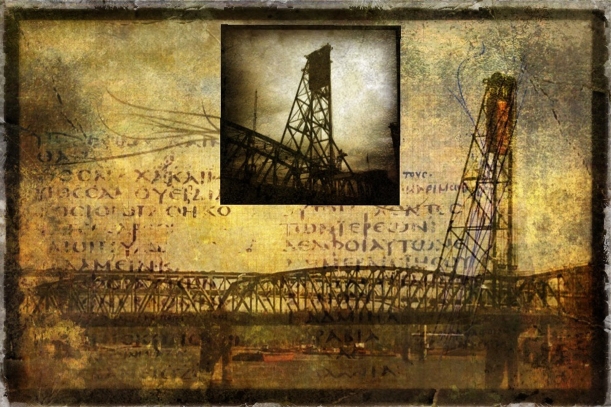 It is such a good thing that there is a Trader Joe’s to run to in order to quickly pick up a spot of color for the table when you have guests. After the blooms grace the table for the event, they can do second duty as photo subject. A nice way to test composition and color combinations. 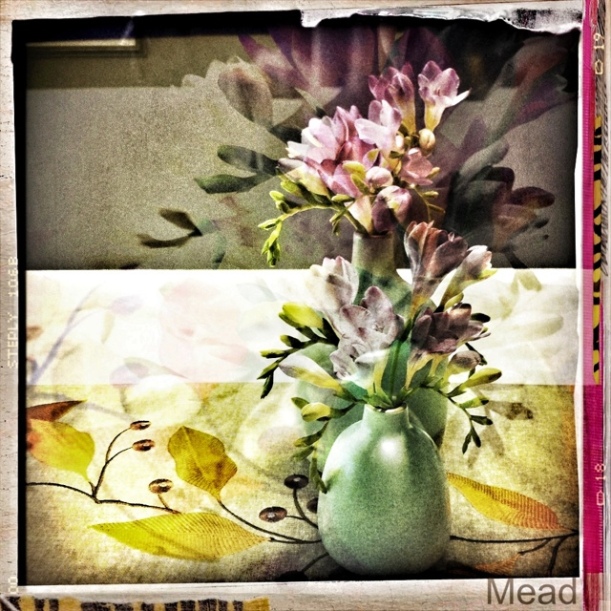 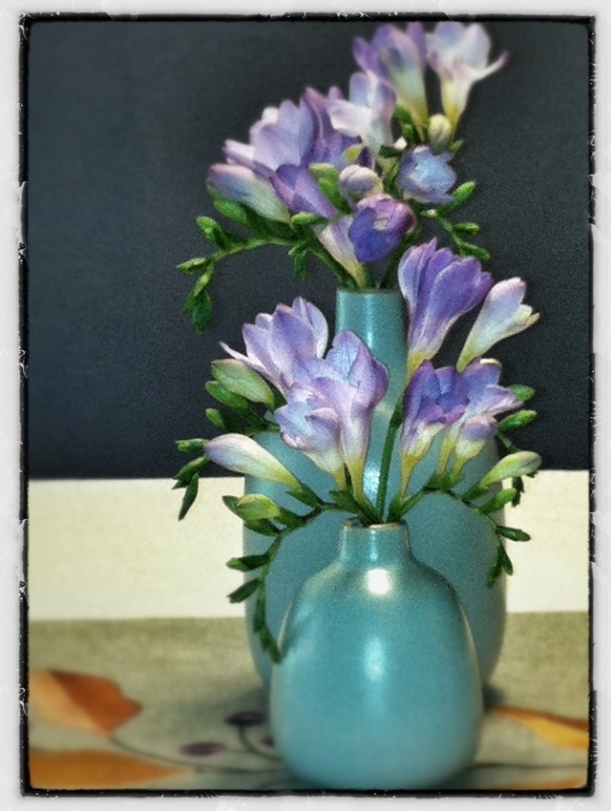 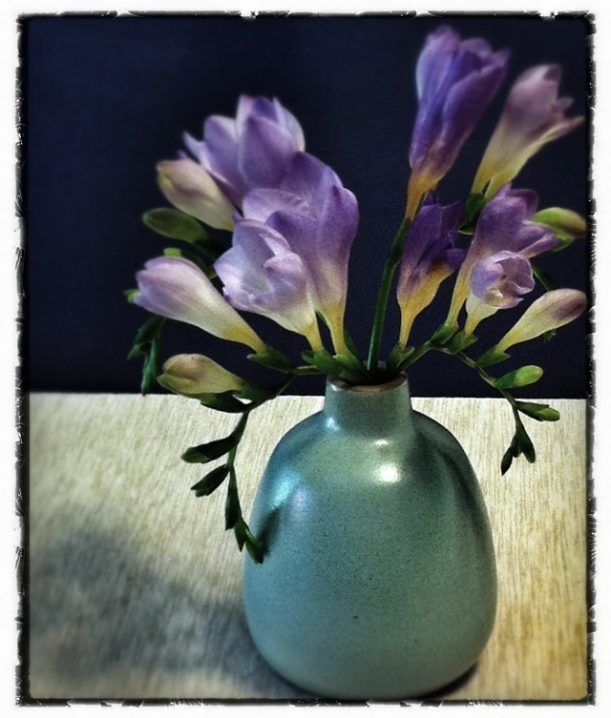 The rest are taken with the native camera of the iPhone and processed with Snapseed app on the iPad.

Took a small break to play with my iPhone today. Exercises my brain, keeps me young, wards off senility-they just haven’t done the research to prove that last one yet. But I know it is true anecdotally. 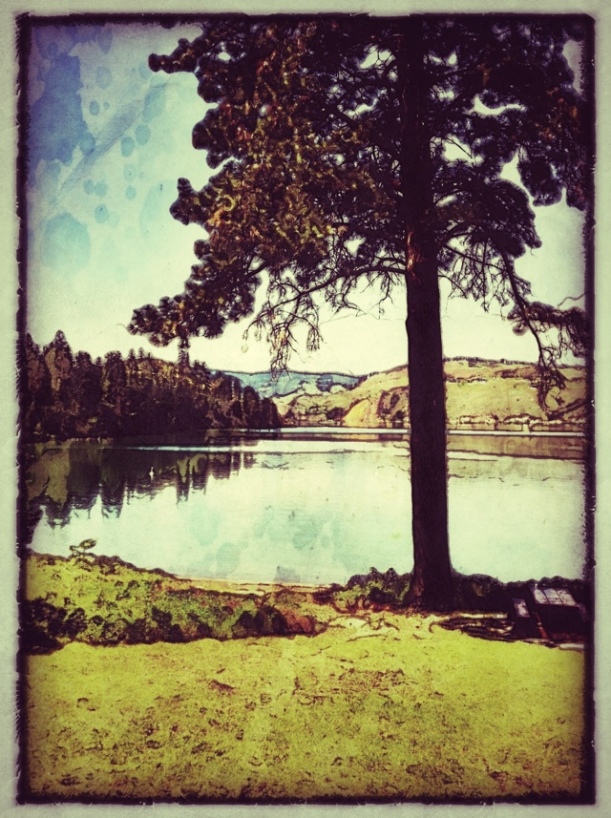 A shot from Okenagen Lake last month in Canada given a run through ArtistaOil app, Blender app, and Snapseed app. Makes me think that it would make a nice silk screen…hmm, what do I have planned for this week.